The Lyd2 is a later design diesel narrow gauge engine that is still in wide use in Poland.

The PKP class Lyd2 is a narrow gauge diesel hydraulic locomotive built by FAUR in Romania, for use initially for sugar cane railways in Egypt. Later variants were developed for use in Poland, Romania and Albania .

It was commissioned by Polskie Koleje Panstwowe for service on the railways of Poland. The Lyd2 was primarily used as an industrial locomotive for service in brick factories, sugar mills and other industrial applications that used rail – such as the logging operations in the Bieszczady Mountains. The pictures above show locomotives that served logging and sugar production.

The locomotive is configured with a single cab, with driving positions for both directions. The diesel engine Maybach MB83B built under license) produces 257 kilowatts (345Â bhp) though documentation shows a peak rating of 415Â bhp from an normally aspirated engine. Transmission occurs by means of hydraulic transmission TH5R-V6. Train braking is via a single pipe air system.

One finds it in use, for example, at the Znin Narrow Gauge Line and the Bieszczady Narrow Gauge Line. In fact, most narrow gauge lines in Poland run either an Lyd2 or an Lxd2. The steam engines are generally run only on special occasions. 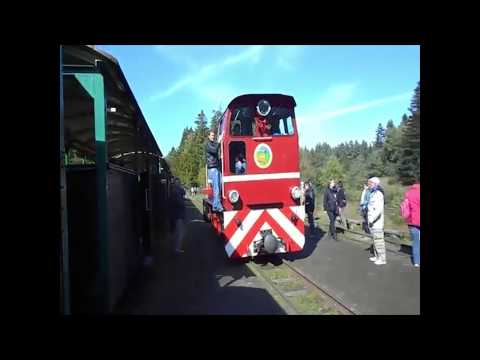 The picture at the right shows a picture of the Lyd2 from the narrow gauge railroad in Biskupin. You can get a collector’s mug with an image of the Lyd2 on it. Information about that can be found by clicking here. Railroad Mugs

We hope that you found the information in this page useful. The internet is all about getting and giving. And giving back is the best. Please donate $1 or more to aid us in our continuing quest to add to and polish the information in our site.